Comprised of nine new neighborhoods, NorthWalk will join The Canyon House and The Hilltop Neighborhoods as the third residential area of Esencia. With a more urban vibe, this mixed-use village will boast two new major parks, including a future Sports Park with fields and courts for the whole family. These new additions will add to the already vibrant lifestyle on The Ranch.

Five outstanding builders have been selected to bring The NorthWalk Neighborhoods to Esencia – CalAtlantic Homes, Meritage Homes, Del Webb, William Lyon Homes, and, making its debut on The Ranch, The New Home Company.

Here’s a sneak peak of the nine neighborhoods to choose from: Azure, Cobalt, Topaz, Modena, Vivaz, Avant, Reverie, Vida (Gavilan® 55+) and Alma (Gavilan® 55+). The neighborhoods will include 750 attached and detached homes, ranging from approximately 700 to nearly 4,500 square feet, with both single- and two-story options. That’s plenty of room to call your own or share with family and friends in spaces designed for modern Californian lifestyles. We will have more information on each neighborhood in the coming weeks.

The Ranch has a long and exciting list of recreational and gathering spaces already open, and The NorthWalk Neighborhoods will offer even more options for leading an active and engaging life. Walkable pathways will connect the nine neighborhoods to our new 5.5-acre park, The Backyard. This eclectic green space will include an outdoor lounge with events bar, DIY workshop and tool shed, 2 children’s playgrounds including hill slides, jungle gyms, tot lot, gravity rail, as well as firepits, BBQ’s and a major Sports Park will be opening in The NorthWalk district in the future. The best things in life are just outside your door in The NorthWalk Neighborhoods.

If you’d like to be among the first to know about the NorthWalk Neighborhoods special event, pricing and announcements – sign up here.

The big day is almost upon us! Join us at Rancho Mission Viejo Sunday, September 25th from 9:00 a.m. to 4:00 p.m. to discover why Esencia was just named “Master Planned Community of the Year” by the Building Industry Association of Southern California.
Read More

As the big day nears, we’re excited to share our guide to getting the most out of Esencia’s Grand Opening. Guests will get a first official look at our newest village on The Ranch. With more than 40 different model homes, you can let your imaginations soar as you tour each one, and discover what living on The Ranch is all about. Join us Sunday, September 20th to discover elevated living.
Read More

Good news! While our Gavilán and Sendero homeowners are enjoying life on The Ranch, we’ve been hard at work planning Rancho Mission Viejo’s newest hilltop village. We’re thrilled to introduce to you: Esencia!
Read More

Sign up to get the latest news, updates and pricing for our new Village of Rienda at Rancho Mission Viejo. The newest and most attainable village ever offered on The Ranch. 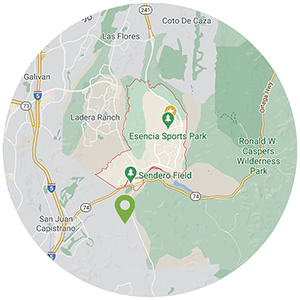 Sign up to get the latest news, updates and pricing for our new Village of Rienda at Rancho Mission Viejo. The newest and most attainable village ever offered on The Ranch with more value & amenities than anywhere else in South Orange County.
Get on the list
Book an Amenity Tour
With a collection of unique amenities offering different experiences for all ages, including indoor/outdoor clubhouses, fitness centers, pools and community farms, The Ranch redefines the meaning of staycation. Tour today and test drive The Ranch.